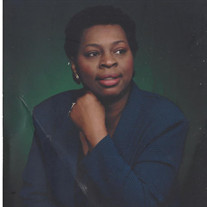 Bernice Lynn Norwood was born August 31, 1957 to Benjamin Harrison Norwood and Pauline Robinson Norwood in Memphis, Tennessee. She departed this life on Thursday, January 10, 2019. Bernice accepted Christ at Union Grove Missionary Baptist Church in Forrest City, Arkansas. Bernice was a graduate of Forrest City High School Class of 1976. Shortly after graduation, she moved to Lansing, Michigan. She joined the First Baptist Church and was a faithful member. She was employed by General Motors and retired after 20 years of service. Bernice was a compassionate person. She always showed love and concern for others above her own. Although she did not have children, she was like a second mother to her nieces and nephews and played an important role in some of their upbringing. She was always there when they needed her. Bernice’s warm-heartedness was also displayed with neighbors and their children. She delighted herself in reading, studying the Bible, writing and journaling. In 2011, Bernice unselfishly moved from her home in Lansing, Michigan to Forrest City, Arkansas to take care of her mother. She often attended Beth Salem Baptist Church with her. Bernice was preceded in death by her father, Benjamin Harrison Norwood, four siblings: Virginia Norwood, Edna Lee Norwood Carter, Cleveland Norwood, and Doris Jean Norwood. Bernice loved her family and leaves to forever cherish her memory: her mother, Pauline Norwood; brothers, Levern (Chevon) Norwood of Knightdale, North Carolina, Doyle (Angeline) Norwood of Las Vegas, Nevada, Milton Norwood of Memphis, Tennessee, Michael (Rachelle) Norwood of Little Rock, Arkansas, and Jerry Norwood of Lansing, Michigan; sister, Pearline Norwood Woodhouse of Forrest City, Arkansas; nieces who grew up with her, Teresa Norwood King of Lansing, Michigan, Dorothy Carter of Jonesboro, Arkansas, and Tiffany Norwood of Lansing Michigan; a special friend, Eugene Edwards; a longtime neighborhood friend, Shirley Williams; and a host of nieces, nephews, aunts, uncles, cousins and friends.

The family of Bernice Lynn Norwood created this Life Tributes page to make it easy to share your memories.

Send flowers to the Norwood family.