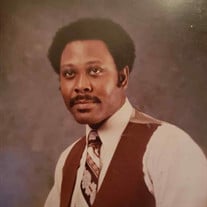 Charley Clayborn Jr. was born on August 10, 1944 in Forrest City, AR to the late Rev. Charley Clayborn Sr. and Sallie Lee Boles. He was preceded in death by his (biological mother) Sallie, (bonus mother) Florence Huffman-Clayborn, (father) Charley, (daughter) Sandra L. Clayborn-Booker, and (sisters) Blonce M. Franklin and Evenne Lewis. Charley accepted Christ as his Lord and Savior at an early age and was baptized at New Light Missionary Baptist Church in Forrest City, AR under the leadership of Rev. Washington. Charley attended Lincoln High School in Forrest City, AR and was a member of the class of 1963 in which he was also an athlete. He later moved with his uncle to Oakland, CA where he completed his high school education. In 1979, Charley received a degree in Accounting from Southwest Community College. On September 14, 1962, Charley enlisted in the United States Army where he served this country until August 29, 1967. Charley loved to travel and was able to see 48 states by working in the trucking industry for many years. He worked for Coors Beer Co., J.B. Hunt, and Swift Transportation just to name a few. In June 2008 his health begin to decline where he served as a Dispatcher for Swift Transportation and therefore retired. Charley was better known by all as CC. He loved music and was often known as the life of the party. He also loved to eat and found joy in breaking bread and conversing about a great many things. On Sunday, October 28, 2018 at 12:20am at River Ridge Nursing Home, Charley made his transition as God called him from his earthly journey to begin his eternal resting. He will be soarly missed. Charley leaves to cherish his legacy of love one daughter Sonya (Sidney) Johnson of Avondale, AZ; two sons Sydney (Cathy) Clayborn of South Holland, IL and Dale (April) Clayborn of Nashville, TN; one sister Hazel (Percy) Jewell of Memphis, TN; one brother John Franklin of Hazel Crest, IL; 12 grandchildren; 7 great grandchildren; a dear cousin Doris Farr; best army buddy Jerry McLilly; and a host of nieces, nephews, cousins, classmates, and special friends. Funeral services will be held Friday November 2, 2018 at 11:00 am at Summerfield Missionary Baptist Church with Rev. James Rhodes officiating. A viewing will be held from 10: am to 11:00am prior to the service. Burial will follow at Arkansas State Veterans Cemetery in Birdeye, AR.

The family of Mr. Charley Clayborn Jr. created this Life Tributes page to make it easy to share your memories.

Send flowers to the Clayborn family.