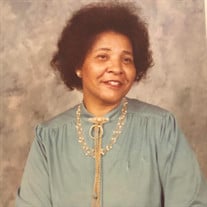 Ethel Lee Dulaney James, also known as “Babe”, was born February 25, 1924 to Rev. Alexander Huston Dulaney and Mrs. Luella Eckford Dulaney in Wabbaseka, AR and is the third of ten children. She grew up in Forrest City, Arkansas. She is a graduate of Lincoln High School Class of 1945. After high school she attended Philander Smith College in Little Rock, AR and taught at a public school in Palestine, AR. Ethel married Almond James, Sr and to this union 4 children were born: Helen Ree, Almond, Jr, Marshall Erwin and Wayne Fenton. Ethel was a very busy woman, wife, mother, grandmother, and a very active Christian. She was a member of St. John Baptist Church in Gary, IN under the leadership of Rev. Julius James. Ethel was a member of the church choir and missionary society, taught Sunday school, and a deaconess. Ethel was also an Avon Consultant and later a Mary Kay Consultant. Mrs. James served as President of the Preschool Parents Group of Campbell Friendship House of the Phyllis Wheatley Federated Club in Gary, IN from 1981-1989. She was also the State Supervisor of the Girls Club and District President of the Federation of Colored Women’s Club, Inc. She was a Literacy tutor at the Gary Public Library. Mrs. James is a Life Member of the NAACP. After the passing of her husband, Almond in 1990 she moved back to Forrest City to be close to her family. Mrs. James united with the Salem M. B. Church to continue God’s work. She was an active member serving as a Vacation Bible School Teacher and on the Mother’s Board. She visited the sick and shut in and those in the nursing homes. Ethel was proud to tell whomever she met about the goodness of the Lord. She encouraged the young and the old and let them know that Jesus is the way. She was preceded in death by her husband Almond James, Sr; two sons; Almond James, Jr and Wayne James; one daughter; Helen James; one brother; Edward Dulaney; four sisters; Bessie Johnson, Veola Ross, Lula Bell Dulaney and Iola Williams. She leaves to cherish her memories a son Marshall (Delois) James of the home, one brother: Samuel B. Dulaney of Memphis, TN; three sisters: Claudine Dulaney, Myrtle White and Alma Dulaney all of Forrest City, AR.; eight grandchildren: George, Anita James, Deborah James, Sharonda (Anthony) Toney, LaJoy Nicole Eleeh, Marsha (Nicholas) Fair, Shawn James and Justin James; five great-grandchildren: Ashlynn Toney, Austin Toney, Avery Toney, B.Eleeh, Nicholas Fair and a host of nieces, nephews and other relatives and friends.

Due to the COVID pandemic CDC guidelines will be followed. Mask are required.