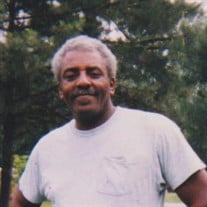 Mr. Leonard Walker was born August 4, 1948 to the late Mr. Jack Walker and Mrs. Lillie Walker in Forrest City, AR. He departed this life March 11, 2017 at home. He accepted Christ under the leadership of Rev. Lee Hamilton, SR. He leaves to... View Obituary & Service Information

The family of Mr. Leonard Walker created this Life Tributes page to make it easy to share your memories.

Send flowers to the Walker family.