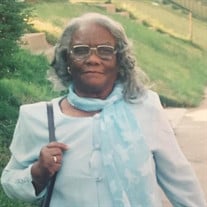 Lula Mae Saine was born on January 2, 1926, in Egypt Arkansas to Samuel David King, and Beatrice Elizabeth Finger. She was the fourth of twelve siblings, seven preceded her in death. Lula confessed Christ at an early age at Sweet Home Baptist... View Obituary & Service Information

Due to the COVID pandemic CDC guidelines will be followed. Masks and social distancing are required.

Send flowers to the Saine family.