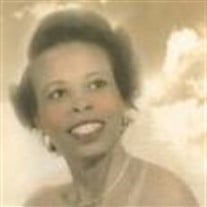 Mamie Millicent Henry Stewart (affectionately called “Shug”) was born October 2, 1920 to Viola Shelton Henry and James Washington Henry in Fordyce, Arkansas. At an early age, she joined Mt. Tabor Missionary Baptist Church, where she was a member for most of her life. Mamie graduated from A. M. and N. College in Pine Bluff, Arkansas and was a dedicated teacher for 38 years. She began her career in Dallas County, Arkansas. After a few years, she relocated to Cotton Plant, where she spent most of her teaching career. There she met and married Robert Stewart, Sr. Her dedication to her students did not end at the end of the day or the culmination of the school year. She spent many hours after school and during the summer, tutoring her students, children and grandchildren. After retiring she continued to help children develop their desire for education. One of her former students Merle Roddy Hill, who became an elementary school educator and an author of children’s books, once wrote, “I especially liked my teacher, Miss Henry. She didn’t look like my momma, but she was just as nice as my momma was.” There is no better compliment. Mamie’s parents; husband; one brother James Arthur Henry; three sisters Jessie Mae Hillard, Eula L. Carter and Georgia Lucille Henry; and grandson Robert Michael Stewart preceded her in death. Her loving children-- Robert (Marcia) Stewart, Jr., Julie (Freddie) Scott and Wanda (Charlie) Gooden survive her. She also leaves to cherish her memory her grandchildren, who especially loved her stories: Darren Scott, Maya (Eli) Scott-Garrard, Remilaku (Tyrone) Stewart Nash and Jeremy Stewart; three great-grandchildren and many nieces and nephews. Memorial Services will be held Saturday September 17, 2016 at Mt. Sinai M. B. Church at 3:00pm with the Rev. Ricky Benson officiating. New Eden Funeral Home in charge of all arrangements.

The family of Mamie H. Stewart created this Life Tributes page to make it easy to share your memories.

Send flowers to the Stewart family.