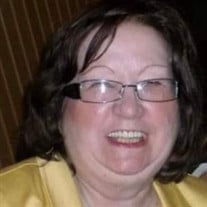 Margaret “Ellen" Craddock 73 of Forrest city, Arkansas passed away Tuesday March 29, 2022, at home surrounded by her kids, grandkids and great grandkids. She was born April 29, 1948, in Ruleville, MS. to Thomas Isom Craddock and Alma Grace Craddock. She was the next to last child out of fourteen children. She is proceeded in death by both parents, all of her siblings, two grandsons-Cameron Michael Bates and Zachary Keith Steele, one granddaughter-Celeste Virginia Bates, and one great-grandson- Vincent Juliet Rice. A daughter of the magnolia state moved to razorback country when she married Johnny Lester Bates, Jr. from Altheimer, Arkansas in 1966. They had two children, Cynthia Marie Bates and Johnny Lester Bates III before divorcing in 1982. Margaret Ellen worked as a PCA and an in-home sitter until she moved to Morgantown, W.V. in 2002 to be with her daughter and grandkids until the family moved to Wynne, Arkansas in 2006 to be with her son and other grandchildren. On May 6, 2018 she was baptized by Brother Hillmon Davis at Rusty Nails Cowboy Church of Forrest City where she remained a member until her passing. Her favorite things to do included spending time with her great-grandkids, loving on puppies, listening to K-Love/Christian music, watching the western channel, and being obsessed with her make-up, purses, coffee and FOOD. She is survived by her two children Cynthia Burns (Donald) of the home, Johnny Bates III(Ginger) of Forrest City, Ar.: Grandchildren Jaclyn Osier (Chris) of Wynne, Ar., Chelsea Bates of Tupelo, MS., Jackson Bates of Forrest City, Ar., Bridgette Baughtman of the home, and Destinie Duren and Desirae Burns both of Helena, Ar.: and 8 great-grandchildren and many other loved ones.

Due to the COVID pandemic CDC guidelines will be followed. Masks and social distancing are required.

Send flowers to the Craddock family.