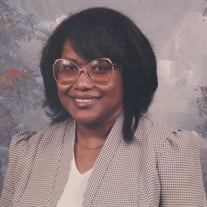 Patricia Ann Ferguson Hinton entered the world on May 8, 1951 as the eldest child of Willis Nathaniel Ferguson and Mary Priscilla Rodgers Ferguson, at home in Parkin, Arkansas. The family later relocated to Wynne, Arkansas in 1965. She was a good student and tried a few different career paths such as modeling and teaching, but eventually deciding that nursing was for her. Not one for participating in sports, she played the saxophone in the school marching band. She graduated from Childress High School in May of 1969. In the fall of 1970 she married James Paul Hinton Sr. They have three children together. Later in 1971 she attended Baptist School of Nursing and became an LPN. In a career spanning over 40 years, she worked at notable institutions such as Crest Park Nursing Home, Cross County Hospital, Arkansas Rehabilitation Institute and St Vincent’s Infirmary. Prior to retiring from nursing for good she was in demand as an excellent home health care specialist. In retirement she enjoyed her small menagerie of chickens, ducks and dogs along with some gardening and growing plants and some of her favorite fruits. Even though travel was not one of her favorite hobbies, she saw her dream of visiting the state of Alaska, travelled to Egypt, Seoul South Korea, Russia and Finland. She loved to drive and knew the highways and byways of Arkansas well. She especially loved a road trip or shopping excursion when with her sisters or her children. She enjoyed Sunday church services at Mt Sinai Church sand attended regularly. She is preceded in death by her parents, two brothers Kenneth and William Ferguson, two sisters Sharon Ferguson Fekete and Nellie Jean Johnson, and one nephew Robert Michael Stewart. Trisha leaves to cherish her memory her three children LaDonna Michelle, James Paul II, Chandra Lynnette, a beloved nephew Derrick Ferguson, four sisters Linda Collins (Alfred), Marcia Stewart (Robert), Gloria Ferguson, Juanita Houston Pruitt, two nieces, five more nephews, several great nieces and nephews, many treasured cousins and lifelong friends. In her own words those she loved are her legacy.

Patricia Ann Ferguson Hinton entered the world on May 8, 1951 as the eldest child of Willis Nathaniel Ferguson and Mary Priscilla Rodgers Ferguson, at home in Parkin, Arkansas. The family later relocated to Wynne, Arkansas in 1965. She was... View Obituary & Service Information

The family of Patricia Hinton created this Life Tributes page to make it easy to share your memories.

Patricia Ann Ferguson Hinton entered the world on May 8, 1951...

Send flowers to the Hinton family.